It all began with a young guy named Savong

Savong had not even finished high school when he opened a small classroom on the side of his father’s house to teach English to younger children. He grew up in desperately poor times. 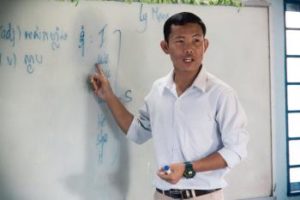 As a child he missed school for many years in order to help his family earn a living. Times were so poor that he was supported by the local monastery, but it was there that he received an inspiring education and like many of his generation Savong was motivated to assist younger Cambodians through education.

Since 2004 he has steered the project forward – finding overseas supporters, building a rural school in 2005 then building the SOC, a home for particularly disadvantaged children in 2008, commencing a scholarship program to send top students to university in 2010 and opening a health center that same year, In 2011 Savong received overseas support to build a small student centre in Siem Reap: a place to house senior rural students to give them access to tertiery education. He also assisted an Austrian group to navigate the paperwork and bureaucracy in order to build a town-based home for disadvantaged children: the Happy Sunshine Orphanage which works as a sister organisation to the SOC.

The story is far from over, and of course you can be part of it as a volunteer teacher in Cambodia, as a sponsor of a child, or as an ongoing supporter.

Before the current school was built and opened in September 2005, Svay Savong began teaching in a small classroom attached to his father’s house near the Killing Fields Pagoda on the edge of Siem Reap. (Picture Right.) His dream was to provide free language education to provide future employment opportunities for students.

Early funding for this school came from a Japanese businessman, and from a variety of visitors from many nations.

By late 2004, Savong had defined his goal to build a school further out in the countryside where families are very poor and where language education is unavailable. In October 2004 he discussed this plan with Yoshikazu Tsuji and Makoto Kimura of Japan, and with Duncan Stuart, a New Zealander. Each made a commitment to help get the project off the ground and from that point, Savong maintained steady communication – his skill and commitment keeping the whole project together from the start. He was 24 at the time.

The school gets built.

In February 2005 a piece of land was found, out near the Rolous group of temples, 25 minutes east of Siem Reap (as far as we can tell it is 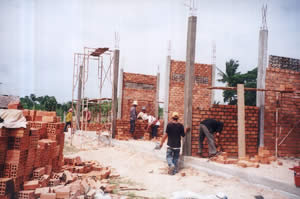 13.325709,103.991132 on Google Maps – though the satellite photo was taken before the school was built.) With the core group of overseas supporters from Japan, USA and New Zealand  the land was purchased and soon building began. It was a big project, with plans sketched on a notepad. From June through to September a well was dug and the three classrooms were constructed, a stairway added for upstairs rooms (that have yet to be built) and a toilet block also built. In September the school was officially opened with a big ceremony.

Every school, every community project is a learning project. In the first few weeks, a thief came into the grounds during class time and stole a student’s bicycle. So after that the school replaced the bicycle, and added measures of security so that the students would feel safe.

Over time it was felt that the school syllabus needed official structure, and recognition, so late in 2007 with the support of a good Irish doctor, Colm Power, the school implemented an accredited course. Now students who pass the exams have certificates recognised by the Government, and by employers. 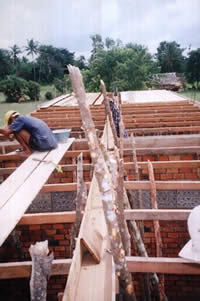 That year, to provide confidence for the teachers, the school implemented salaries by auto-payment, and these salaries have since been adjusted to match inflation. During this time Makoto was also able to visit again – he built the wall around the school yard – so step by step the school has made many improvements: a computer for the director (thanks Sue!) and a generator for lights and fans.

In 2006 a volleyball net gave the boys especially, a sporting focal point and has helped the school become a social hub.

During the period 2006-2007 the school also established relationships with local Siem Reap guest houses to help publicise the work of the school, and to invite volunteers. Since then a steady stream of volunteers from many nations have visited the school – many bringing skills, gifts, new ideas.

Starting the year with accreditation was pretty big news for the school, and was reflected in school attendance, with more students attending: all voluntarily. But then during the year kind supporters from the USA made contact and offered to fund the construction of the library. 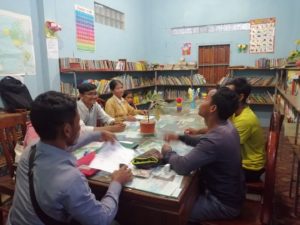 The library took just 12 weeks to complete, and the school now has a librarian and a rapidly growing collection of books and graphic novels for all ages in Khmer, Japanese and English.

Soon after, the school was lucky to host for 8 excellent weeks a volunteer from Australia who applied a strictly “spoken English” policy in the classroom – which really lifted the conversational skills in the classroom. He also taught about environmental issues and his influence is evident in the tidier appearance of the grounds, including a more defined volleyball pitch.

Also in 2008 the orphanage land was purchased and in February an American couple  John and Christina provided the funding so that the accommodation for children could be built. See more about the orphanage and meet these children.

By late 2008 these initiatives were topped up with the donation (by a kind group of visitors from Brunei) of more computers to the school which form the basis of computer teaching that commenced in early 2009. What will the years ahead bring?

The challenges ahead include finding sponsorship for the orphan boys, and developing a scholarship system so we can send the brightest and the best to university and support them adequately to reach their potential.

In 2010 the school introduced a scholarship programme for the top students. This is designed to enable the ‘best of the best’ students the full opportunity to study at university. There are many hurdles to overcome. Students must have compelted Grade 12 at High School, and then they face enrolment fees, the requirement to have a laptop, the need to meet transport costs into town as well as the ened to meet day to day expenses as a student – for books and food. 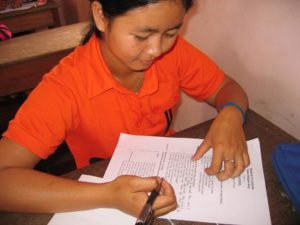 So the scholarship meets all these financial demands, while the student is then able to focus on the academic challenge.  Following examinations at Savong’s School, four winners were found and since then they have been doing extremely well at University in Siem Reap – one of them regularly coming top of her class and beating the much wealthier ‘city students.’  Here are our four winners, below, enjoying breakfast in town before heading back to Savong School where they take turns to teach and mentor other, younger students.

In 2011 the second wave of scholarship examinations was held, and this time five winners were found however none in this wave had completed Grade 12 at High School, so the scholarship has been extended to pay for the completion of their schooling before sponsoring these students through University.

The presence of the scholarship program is just one reason why attendance at Savong School grew significantly in 2011. Other reasons include a greater presence of volunteers, the inclusion of computer teaching – and more computers – as well as the addition of Korean classes to supplement those in English and Japanese.

The "step by step" philosophy.

All schools evolve and grow to reflect and meet the needs of their community. Savong’s School keeps moving forwards, and along the way we discover needs that we never first anticipated. For example in 2008 and early 2009 students have come to the director, Savong, asking for support: food and housing. In one recent case the student, an orphan reported living with his grandmother who could not afford to feed and clothe him. “He was in tears,” Savong told me, “and he pleaded for us to house him.” 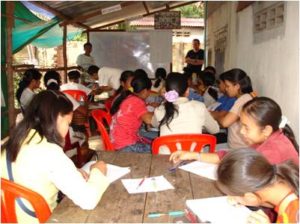 And so, with stories like this, Savong has approached supporters (John and Christina Quill of the USA came to the party here) and built a small home which housed 8 orphan boys. This has grown, and now houses 21 children. An orphanage? No, it was not quite our original plan – but we have learned that the school functions as a social agency within the community.

In the same way, the school has become a meeting place for students even outside school hours. There’s generally a volleyball game going, and the computer classroom – we just know – will serve as an internet cafe in a district where there are few if any other computers. This will change the way the school relates to its community – perhaps by connecting to more families, or by becoming an information centre.

By taking a “step by step” approach to developing the school we have been able to deal with each issue, and each opportunity – one at a time, making sure we don’t over-promise or fail. There are always things we can do better of course, but so long as the objectives are clear, and there’s a willingness to learn, improve and meet new opportunities, then step by step we’ll achieve big things.