By removing simple barriers to education we can free a generation of students from poverty.

Children in Cambodia have many barriers standing between them and a great education. Poverty is one problem, but so is a lack of education spending in this country and the endemic system where even state schools charge students each month to help cover saalries and other expenses. The objective of Savong’s School is to provide free education, the necessary teaching resources for teaching, and the opportunity for the best students to proceed to university. 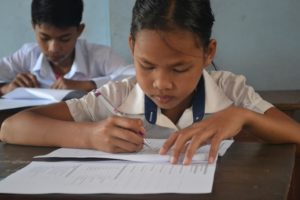 In Cambodia 12.4% of government spending is in education 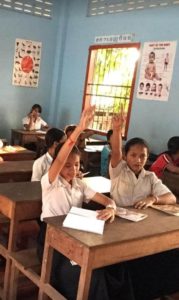 Of Cambodia’s 14.4 million people, half are under age 22 – and so there is a burgeoning school age population. Education statistics are improving dramatically but are still very low by world standards. Education makes up a small part of the Government annual spend, and the problem is that in absolute terms, this expenditure is very low. Just 1.6% of Cambodia’s GDP (Gross Domestic Product) according to UNESCO is spent on education – ranking around 170th in the world. Most western countries spend around 5.5% to 6.4% of GDP on education.

By the end of 2010 the Cambodian Government acknowledged that foreign-funded schools were an integral and necessary part of the education system: a tacit admission that it was unable to meet the costs of such a system by itself.   Even so, the Government has asserted its authority over foreign-funded schools, for example by putting some pressure on to teach Khmer and base subjects such as mathematics and science, rather than simply foreign languages. Likewise, foreign-funded NGOs face strict ultimatums if they criticise the Government.

The school system in Cambodia

Cambodia’s formal education system is said to go back to the 13th century. You will note when you visit the Angkor Wat temples that central to each temple was a library – a storehouse of knowledge. Education has been revered in Cambodia – a reflection of the Buddhist culture.

From the early twentieth century until 1975, the system of mass education in Cambodia operated on the French model with the primary schools operating in 2 three year cycles (students would graduate with certificates at each level) before progressing to secondary schools.

During the Khmer Rouge regime from 1975 to 1979, education was dealt a severe setback, and the great strides made in literacy and in education during the two decades following independence were obliterated systematically. Schools were closed, and educated people and teachers were subjected to, at the least, suspicion and harsh treatment and, at the worst, execution. At the beginning of the 1970s, more than 20,000 teachers lived in Cambodia; only about 5,000 of the teachers remained 10 years later. Soviet sources report that 90 percent of all teachers were killed under the Khmer Rouge regime. Only 50 of the 725 university instructors, 207 of the 2,300 secondary school teachers, and 2,717 of the 21,311 primary school teachers survived.

After the Khmer Rouge were driven from power, the educational system had to be re-created from almost nothing. Illiteracy had climbed to more than 40 percent, and most young people under the age of 14 lacked any basic education.

The information is re-published from The Library of Congress Country Studies and the CIA World Factbook.

Today’s education system is stil being rebuilt after the legacy of knowledge and experience was stripped away during the Pol Pot years.

The main focus of the education system, at all levels, is on basic literacy. State schools are under-equipped, and very often classes are run without textbooks or pens and pads for the students. The “chalk and talk” style of teaching predominates.

Teachers are not paid well, though this is improving marginally with university graduate teachers being offered higher salaries than their counterparts – but with pay around $US50 to $60 every month two widespread problems have arisen. The first is bribe taking; with teachers accepting cash gifts in return for additional after school tuition or, worse, “pass grades” in examinations. There’s a blurred ethical boundary between trying to earn enough for a living, versus breaking the professional code of teaching.

The second problem is that of skilled teachers “going private” and simply offering tuition for a fee of perhaps $20 per month per student. These teachers may be earning four or more times their state school counterparts, but the effect is to undermine the State system, and also to widen the gap between rich and poor.

It is in this context that the promise of free education – genuinely free, with no gifts, no bribes or fees – is a significant benefit to poor rural families.